Small pamphlet-type magazines, such as the quarterly Diabetes Focus hold lots of helpful, healthful, informative information concerning T1Ds and T2Ds.  For instance, I re-wrote four short articles from the Fall/Winter 2017 edition with its appropriate picture, shown below.

1.) How to Win at Weight Loss  “Consistently losing even small amounts of weight in the early days  of a new diet plan can increase your chances of long-term weight loss success.

“A Drexel University study published in Obesity involved 183 participants who were either overweight or obese.  For one year, each participant followed a weight-loss program composed of meal replacements and behavior goals – and recorded food-related behaviors, such as cravings, binge eating, and emotional eating.  Participants also attended weekly weigh-in sessions.  The final weigh-in occurred two years after the weight loss program began.  Those who experienced consistent weight loss in the first six to 12 weeks of the program were more likely to maintain their weight loss at 12 and 24 months than those whose weight fluctuated in the first 12 weeks.

Interesting, right?  I was not a part of this story, but want to share it with you.  Wait, there’s more….

3.)  Take a Hike  “Walking may have big benefits for people with chronic kidney disease (CKD).  People with CKD who walked three to four times per week were 27 percent less likely to need kidney dialysis or a kidney transplant over the course of a yearlong study than those who didn’t.”  (Note:  I walk daily, mostly due to my two dogs needing and wanting to get out.   Having a dog or two is great motivation and self-encouragement to just get outside and move!  Walking has also helped to alleviate my neuropathy symptoms.  It’s just plain wonderful!)

4.)  51  “… Percentage of millenials who consider type 2 diabetes to be a serious health condition, compared with 84 percent of older adults.”

I hope you enjoyed these small, factual tidbits and I look forward to hearing from you!  #buckroth 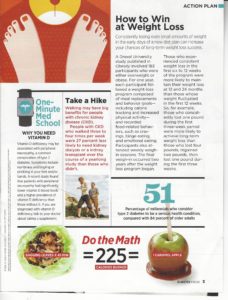