This second chapter book continues the series – a trilogy, perhaps… 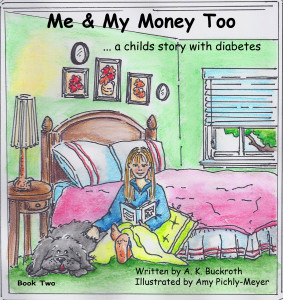 My written attempts to express the life responsibilities, concerns and strategies of a T1D child and that of a diabetic dog are represented in this book.

Here is a ‘reminder’ excerpt that began this expressive and attentive book series.  I am sure you will enjoy it.  From Chapter 3, here we go…

“My family and I adopted Money during summer vacation last year. That was before I began fifth grade. Many months later, I noticed he was acting unusual – not eating, drinking a lot of water, peeing a lot, and not being his usual happy and active self. I knew he did not feel well. His breath was very stinky strong! Like dog food barf. Bad like that.

After telling my parents about what I saw and suspected, my mother made an appointment for the three of us – Mom, Money and me – to see Money’s veterinarian, Dr. Wooden. He is a nice older man that we met when we first got Money. He was very gentle with Money. I remember his hands and how he calmly touched Money during that first examination. He spoke gently to Money, telling him what a good boy he was, to stay still, and such. Dr. Wooden slowly, gently, glided his hands over Money’s body, feeling for anything that was not supposed to be there.

Once the examination was done, Dr. Wooden gave Money a couple of necessary vaccination shots like rabies, something listed as “bortadella” and another one so he wouldn’t get heart worms. That sounds awful, the heart worm part. I don’t like to think about that happening! Ick!

This time, I shared my concerns with Dr. Wooden regarding Money’s recent behavior. Dr. Wooden immediately told my mother and me that he would need to run some blood tests on Money.

Dr. Wooden listened closely to what I was telling him. I liked that.  He asked me lots of questions about Money such as: “What did Money eat everyday and when? What type of exercise did he get? When did he sleep? Did I give him dog cookies or table scraps or both?   How did he act in the morning — was he perky and happy or sleepy, lazy-like, uncaring?” I answered all his questions.

Dr. Wooden tested Money’s blood with a lancet (pricker) pen and a glucometer (blood glucose testing machine) that is similar to mine. I watched him but I do not know what that result was. After that first test, Dr. Wooden requested more extensive blood work right away! This meant that Money would have to stay overnight – in the hospital! Oh, that was awful! I did not want to leave him there. He cried and whined and pulled on his leash and jumped up and down when my mother and I were leaving. That made me sad. I cried a little.

On the way home, I knew I had to call Wayne right away.  He’s my best friend and he knows Money.  I just had to tell him.  Once inside the door, I ran upstairs to my bedroom and found my phone.  I sat on the floor next to Money’s bed pillow and I pressed Wayne’s number.

Hey Kali.  Guess what I did on my train village set up?  I didn’t have a chance to tell you in school today.  I added some new pieces.”

“Wayne, Money is in the hospital,” I blurted.

I repeated the worrisome details, talking so fast I was out of breath.

“Geez, Kali,” Wayne responded.  “Do you know when he’s getting out?”

“Yah.  My mother and I will pick him up tomorrow after school,” I told him.  “Dr. Wooden will tell us if anything is wrong.”

“I hope he’s not diabetic, Kali.  If he is, will you have to give him shots?”

“Probably,” I answered.  “But I don’t like to thing about that just yet.  I miss my Money and can’t wait to get him home tomorrow.”  My throat got tight talking about him.

“Money will be okay.  Don’t worry,” Wayne tried to reassure me.  “I’ve gotta get going on my chores and then my homework.  I’ll look for you in school tomorrow,” Wayne told me.

Even though talking with Wayne made me feel better, I was still worried about Money.  I couldn’t sleep.  But I knew that Money was in the hospital for a good reason.  Dr. Wooden and his staff were nice.  I felt that I trusted them.  I knew that Money would be well taken care of.  But I missed him.  I missed him bad.

The next day at school, I thought about nothing else but Money.  I couldn’t concentrate on my school work.  I was anxious and nervous.  My belly was shaky inside.  At one point, Mr. Wallace, our algebra teacher (whom we kids nicknamed “Scruffy Face” because of his beard) asked me to stay after class.

“What is wrong with you today, Kali?” he sternly asked.  “You’re not paying attention.”

“My dog is in the hospital,” my voice quivered.  “I’m worried about him.”

“Today, after school.  My mother is picking me up so I won’t have to take the bus and we’re going to get him out and find out why he’s been so sick.  I think he’s diabetic, like me, which means a lot of things.  I know a lot about diabetes, but I don’t know too much about diabetes in dogs and I’m a little scared, I guess.”  Phew, that was a lot to say in one breath!

“Mmm,” sounded Sruffy Face.  “This is important.  But I need you to concentrate on these new algebra formulas.  These are important too.  I have an aunt whose cat has diabetes.  But Cupcake, the cat, is doing very well.”

“Does your aunt have to give Cupcake shots?”

“Oh yes, twice a day,” he said.  “And Cupcake eats a healthy diet for a cat and is as happy as ever.  Maybe a little too pudgy.  But she is happy.”

“Thank you, Scruf- I mean Mr. Wallace.  I’ll try my best to work on my algebra formulas.”

“Okay, Kali.  I’ll see you tomorrow.  You’re one of my best students, you know.  I want you to continue to do well in my class.” he said with a smile as his long black, bushy eyebrows wiggled on his forehead.

I felt better after sharing his news about my Money with Mr. Wallace.

After school that fateful day, my mother and I went to the animal hospital to get Money and find out what was done, along with any diagnosis.  While seated in the office lobby for forever, one of Dr. Wooden’s nurses brought Money to us.  Oh my gosh!  He was so-oo-oo happy and excited to see us!  Jumping up and down, licking my hands, sniffing my mother and me, his tail going round and round, we were happy to see him too!

“Dr. Wooden will be right in to see you,” the nurse said.

“Okay.  Thank you,” replied my mother.

The three of us sat quietly, anxiously waiting for Dr. Wooden to come through the door.  Money placed his bandaged right front paw on my lap, staring at me.  I rubbed his leg and told him he will be fine, such a good boy, while kissing his head and rubbing his ears.  The bandage caused him to limp a little.  That spot was probably sore because Dr. Wooden had to take more blood.  Also, that particular spot had been shaved to get access to a vein.  I felt sad to see Money with a bandage.  But I knew he was going to be better now.  Like me, when I have to have a blood test every two months to show that me and my diabetes are staying balanced.  Something called an HbA1c — H-B-A-1-C — test shows my average blood sugars during that time period.  What I call “a good score” is 6.5%.  I’ve been as low as 6.2% and as high as 7.1%.  The highest number is 14%.  That’s really really bad from what my doctor told me!

I don’t understand all of it.  But I do know that keeping my blood sugars in the range of 80 and 120 is better than them being high, that’s for sure.  It is very — very — hard to keep blood sugars between 80 and 120 day after day.  I just do the best I can.

“Hello Kali, Mrs. Landgren,” Dr. Wooden said as he walked through the examining room door.  Money went right over to him, smelling his coat, his shoes.  “Good boy, Money.  How are you feeling, huh?  I bet you’re feeling much better.”  I remember he petted and rubbed Money’s back and ears and Money liked that.  Holding a file in one arm — probably Money’s medical record — Dr. Wooden looked at me, saying “Kali, you were right.  Money has diabetes.”

This continuing story book not only gives highlighted attentions to T1Ds, but to diabetes in animals as well.  According to my research, such a factor has risen 300% in the past decade.

Kali and Money are bonded through diabetes.  They take care of each other which is experienced with loving dog owners worldwide.  “Care” and “loving” are the keywords.

Kali’s experiences are truthful with many juvenile diabetics.  In one episode, she has a convulsion due to over-extensive exercise at an overnight school camping field trip to Blue Moccasin Mountain.  Another time in her youthful, busy life, she forgot to give Money his shot.   Her best friend, Wayne, and she, raise money due to a special visitor that is expected after a long absence.  Kali also experiences a school bully, showing Kali’s maturity and self-awareness in a tremendously stressful situation.  Reality strikes!  Self-discipline is used during a Halloween Festival at Kali’s school and a possible love-interest enters the scene.  Ahh, youthful joys!

Revealing more of her young life experiences as a T1D, Kali and Money continue to be courageous in this second dhildren’s book.  Her family understands and appreciates what needs to be done on a daily basis – diets, exercise, insulin, and planning.

This particular delightfully illustrated chapter-story-book is approximately 140 pages long, appropriate for 8 year olds.  It is as much fun to read as it was to write.  I am delighted to have been able to prepare this for you.  This story reflects many – not all – of the realities involved in the lives of juvenile diabetics/T1Ds.

Illustrated by the same distinctly artful and emotionally visual illustrator as in Me & My Money…a childs story of diabetes, Amy Pichly-Meyer repeated her talents.

It is avialable at Amazon.com in paperback edition as well as Kindle e-readers. Local bookstores carry copies as well as local libraries with requests.

Thank you for visiting me.  I always appreciate your purchases, reviews, and comments.

Positive book reviews at Amazon.com are welcome.  Please be in touch!

Your shopping cart is empty
Visit the shop